In 1898, Arthur Edward Guinness, aka Lord Ardilaun, acquired Baymount Castle, an 18th-century mansion next to the St Anne’s estate in Clontarf, 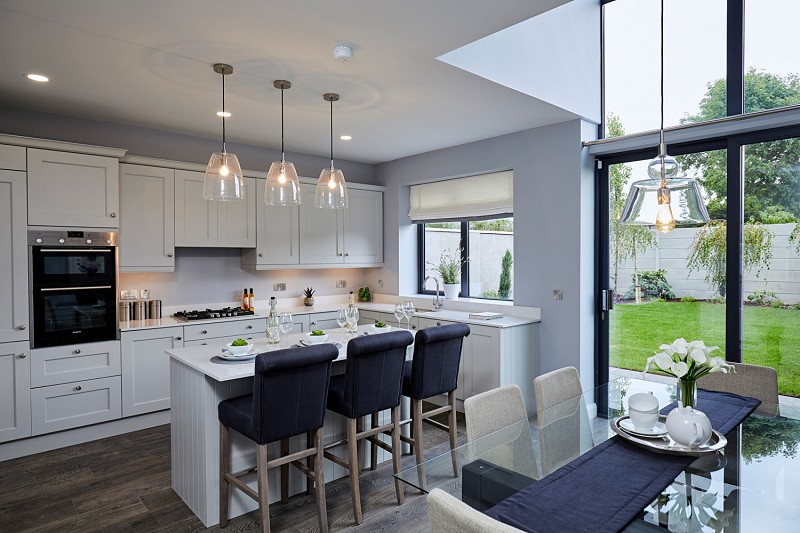 In 1898, Arthur Edward Guinness, aka Lord Ardilaun, acquired Baymount Castle, an 18th-century mansion next to the St Anne’s estate in Clontarf, where the scion of the brewing family was born. The great-grandson of the founder of the brewing empire is remembered to this day in a statue at St Stephen’s Green, which Lord Ardilaun bought, landscaped and gave to the people of Dublin.

By 1948, Baymount Castle had come to the attention of John Charles McQuaid, the Archbishop of Dublin and all-powerful ruler of conservative Catholic Ireland. McQuaid asked the Jesuits to establish a retreat house there, so the order bought the stately home and its 17 acres and renamed it Manresa House, after Manresa in Catalonia, Spain, where St Ignatius of Loyola, the founder of the Jesuits, had many spiritual experiences.

Adjoining the parklands of Manresa House is Castle Vernon, a new development behind the rear gardens of the houses that line Dollymount Avenue. Twelve of these four-bed-plus-study family are being released to the market this weekend, with a further 12 due to go on the market next summer. Prices at the Richmond Homes developed enclave start at €895,000.

Many of these contemporary-style, 2,156-sq ft three-storey homes have views of nearby Dollymount Strand from their first and second floors. Their exteriors feature a brick-and-render façade with feature roof cladding, an Ultratech front door and double-glazed windows from Munster Joinery. There are two designated parking spaces per house.

Each rear garden at Castle Vernon has a south-westerly aspect, so the open-plan kitchen and dining room, with its double-height glazing, is flooded with natural light. Sliding patio doors open from the dining space to a paved patio and garden, which can be lit up at night.

Also on the ground floor, which has 9ft ceiling-to-floor heights, is a large living room to the front with a bay window and a central staircase with an oak handrail and newels and storage space underneath. A separate utility and a guest lavatory completes the ground floor accommodation.

The staircase leads to the first floor, where there is a master en-suite bedroom with walk-in wardrobes and another ensuite bedroom. This floor also benefits from the natural light of the glazed double-height panels from below.

The second floor is home to a family bathroom which has also been fitted with a bath and separate large shower and to two bedrooms. However, the selling agent says this space could also be used as an upstairs living room because its large picture window commands views of Manresa. There is also a further room at this level.

The Clontarf and Killester Dart stations are within walking distance from Castle Vernon and there’s also a feeder bus to the Clontarf station. Dollymount Strand and the new cycle path between Dublin city centre and Howth are less than 200m away. The showhouse at Castle Vernon, styled by Venture Design, is now on view by appointment.