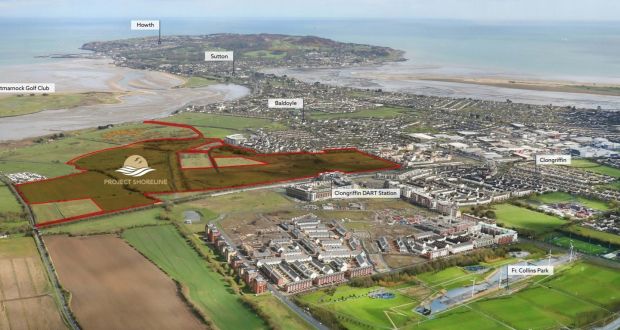 Irish housebuilder Richmond Homes has emerged as the successful purchaser of a 51 hectare (125 acre) site in Baldoyle, north Dublin, in what is one of the biggest development land deals of the year. The substantial landbank, dubbed “Project Shoreline”, was placed on the market in June by joint receivers Tom O’Brien and Simon Coyle of Mazars through agent Savills quoting € 42 million. It is understood that the asking price was not achieved and the winning bid was in the range of €36 to € 38 million, with the sale having completed in recent days.

The Baldoyle site comprises 23 hectares (56 acres) of residential zoned land and 28 hectares (69 acres) of lands zoned for open space and high-amenity space and was offered for sale with the benefit of an existing planning permission for 546 units. A development feasibility assessment for the site suggested that it could accommodate at least 1,592 units through further planning permissions. If Richmond Homes opts to pursue such a development, it would be one of the largest in the history of the State.

It is probable that any development of the lands will incorporate elements of both build-to-sell and build-to-rent accommodation. The lands are located directly adjacent to the Clongriffin Dart station, affording access to Dublin city centre within 20 minutes, and regular access to Malahide and to Belfast. The area has seen a flurry of activity in recent times including Gannon Homes’ Belltree scheme and Cairn Homes’ Parkside development.

Meanwhile, in south Dublin, Richmond Homes has agreed to sell its upmarket Belvoir Park apartment complex on Stillorgan’s Upper Kilmacud Road for about €28 million to an institutional purchaser. Due for delivery early next year, at which point the sale will complete, the scheme incorporates 55 units, of which nine are one-bedroomed units (50-66sq m), 34 are two-beds (78-114sq m) and 12 are three-beds (96-141sq m). The development comprises two new-build blocks along with a refurbished period structure known as Kilmacud House.

Richmond Homes appointed agent Hooke & MacDonald earlier this year to carry out a targeted sales campaign aimed at investors in the private rented sector (PRS), resulting in about six parties chasing the Stillorgan complex. The price achieved equates to an average of about € 510,000 per unit, reflecting investors’ continued strong appetite for rental stock in prime locations. The development is situated about 750 metres from the Stillorgan Luas stop, while the Sandyford Business District (SBD), home to major employers such as Facebook, Google and Microsoft, is in close proximity.